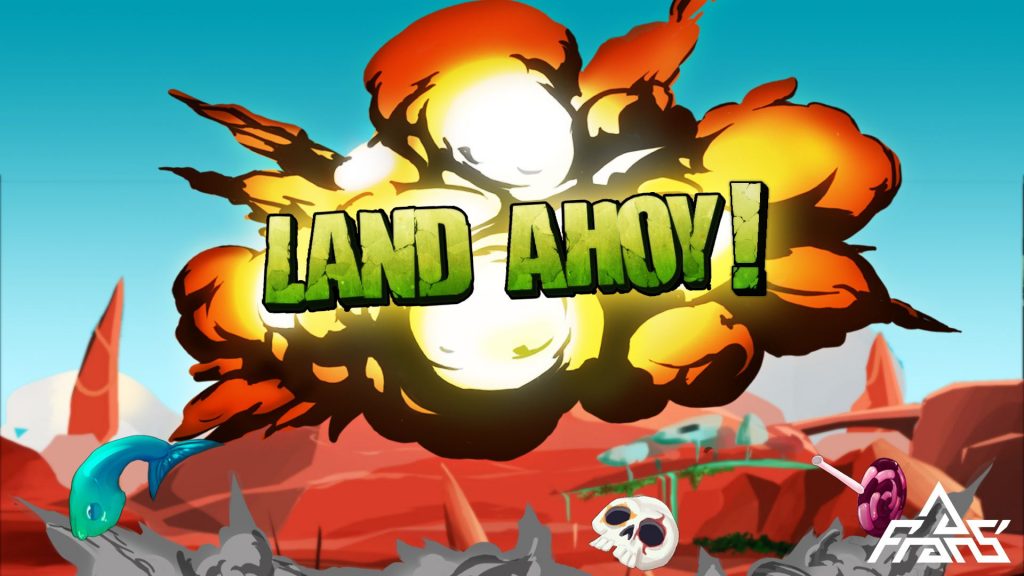 Progress of a match

Two players are fighting on the same PC passing themselves the controller, in an epic battle with two teams of zombie vikings! The players start the match head-to-head, at both sides of the island. The 5 zombie vikings of the first player are shot on the ground, ready for the battle! He can start his turn, then when he will have ended, he passes the controller to the second player, and so on!

At the beginning of his turn, the player has access to his ship, which is his base to manage his team. Through the food collected by eliminating the opponent’s vikings, he can choose to buy a skill to improve his characters, to shoot ammo packs or to call a new viking to extend his army.

Once the turn’s preparation step is ended, the player gets back to the island (which will quickly become a battlefield). He controls a viking, which at each turn can move until a given distance (shown by the circle on the ground) and shoot once with the weapon of his choice. The player has one minute to switch between his vikings to progress on the map and to create the terror on the terrain!

To win, you will have to kill the Fucking Chicken at the centre of the island. This one is woke up by the vikings arrival and appears after some turns. The player who will hit him with the most damages during the match will win! But a bonus will be given to the one who will strike the decisive blow, be careful of the turnaround! Obviously, the Fucking Chicken won’t accept the situation, and will launch an attack on the viking of his choice after the turn of every player.

To fight, the player can use 9 weapons, sorted in 4 categories.

The bats are hand-to-hand weapons which do a lot of damage, and throw the opponent very far. The guns are middle range weapons, very easy to use with the cross at the centre of the screen. The grenades are explosive weapons of middle range, useful to touch the maximum of enemies! Finally, the rocket launchers are more complicated to use, but they have a big range and do huge damages.

Through the skill tree, it’s possible to improve the damage or the range of different weapons. Some skills allow to get different effects, like shooting at the same time 3 rockets instead of one, unlock the headshot to double the damages on the head with the guns, or throw the enemies farther with the bats.

To manage the parameters of the different weapons easily, I created a database in the Unity project to group all these informations. So it’s easy for the Game Designer to balance the weapons’ range, their damages or their projection force (used by the ragdoll, mentioned below).

The weapons from the category grenade and rocket launcher work with a ballistics system developed for the game. Don’t hesitate to read the article which speaks about that, it’s even possible to test it in your browser.

The game would be less funny if we haven’t included the ragdoll. With it, the zombie vikings fly through the island, in rhythm with the shots and the explosions. A viking being a tough cookie, we have added to him the possibility to get back on his feet after a flight.

I also worked hard on the camera, to give it a very dynamic motion. From the ship view to the shot view, there is only one camera! All is made so that the transitions between each view are smooth, in this way it’s nice to switch between his zombie vikings on the terrain.

To highlight the fun introduced by the ragdoll, I also created trailers with a slow motion to admire how the zombie vikings are thrown through the decor.

We were 8 people to take part in the development of Land Ahoy!. I have coded the largest part of the features of the game. Simon Hembert has made the game design document and provided to me a precious help in the programming side (especially for the UI, the sound and the varied feedback). We can thank Marianne Bal for the crazy graphic part of the game, helped by Jeremy Lesage on the technical side for the 3D modelling of the zombie viking and the FXs. Amelie Bonduelle has designed the UI. Victor Delvinquiere has created the textures of the environment, which was designed and imagined by Julien Lucas. Finally, Cyril Huguet has worked on the level design of the island, the animations of the zombie viking and the Fucking Chicken.